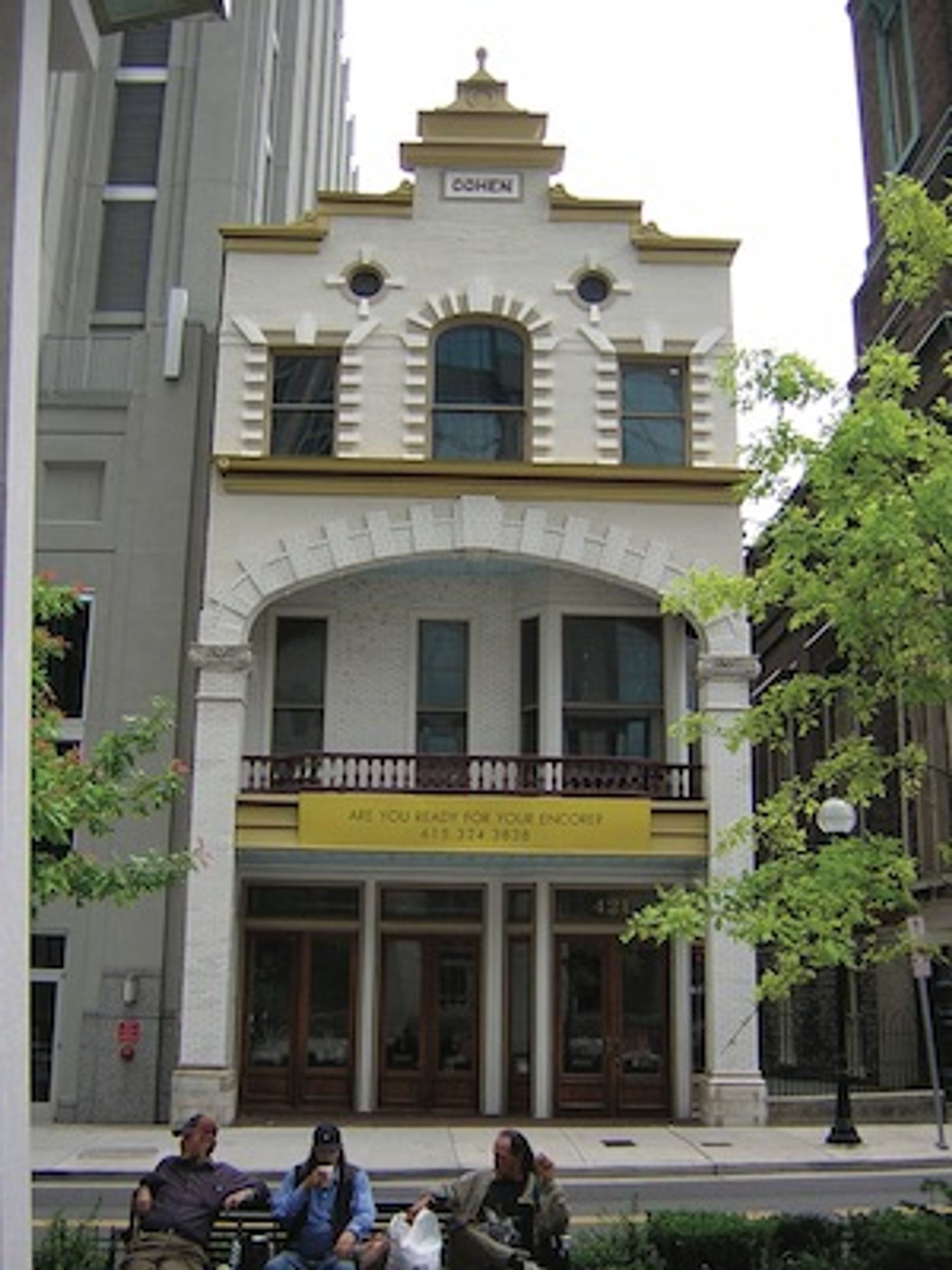 Meyer Cohen, a successful Nashville pawnbroker and jeweler, built this Renaissance Revival-style building in 1890 along the bustling commercial corridor known then as Spring Street. The street level served his shop while the upper two floors served as a residence for him and his wife, George-Etta Brinkley Cohen. Mrs. Cohen lived and entertained here from the time of her marriage in 1897 until her death in 1930. She decorated and furnished the two-story townhouse with carved oak mantelpieces, stained-glass windows, and fine furnishings.  In 1925, she deeded her residence and its contents to George Peabody University.

Obscured from view for a quarter-century by a store awning and boarded-up windows, this impressive building has been uncovered to reveal two white glazed-brick arches that rise from the sidewalk to the top of the second floor. Within the arches are two balustraded loggia with bay windows projecting from the second floor.

Historic Information:
421 Church Street, also known as the Cohen Building, was constructed in 1890 by Meyer and Etta Brinkley Cohen. Meyer ran a jewelry store on the first floor while the upper two floors were a residence for him and his wife. Etta Brinkley Cohen was known for hosting many parties at the Cohen building throughout her lifetime and donated the building to the Peabody College upon her death in 1930. It has changed hands many times since, the most recent of which was in 2012 when Giarratana Development bought the property. Giarratana renovated and restored the Cohen Building, putting their offices on the second floor. A bridal shop was added to the ground level and a luxury four room loft occupies the third floor. The Cohen Loft is currently available to rent by the night.

The Cohen building is a unique gem downtown. Built in the Italian Renaissance style, its bold paint gives a much more modern feel to the century-old building. The entryway is framed by two 2-story stone arches that also frame the balcony on the second floor. The building was one of the first in Nashville to have an elevator installed and once boasted a grand staircase. Originally, the windows on the façade of the building were made of stained glass, but these were replaced throughout the years. One window can still be seen on display today in the Tennessee State Museum. The basic structure of the exterior remains identical to how it was built 125 years ago.